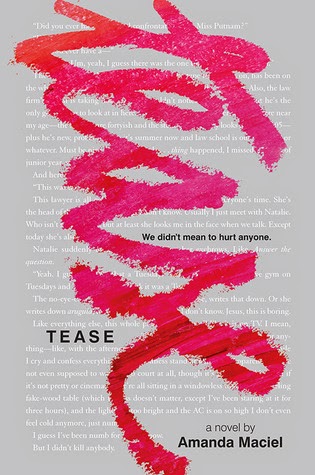 From debut author Amanda Maciel comes a provocative and unforgettable novel, inspired by real-life incidents, about a teenage girl who faces criminal charges for bullying after a classmate commits suicide.
Emma Putnam is dead, and it's all Sara Wharton's fault. At least, that's what everyone seems to think. Sara, along with her best friend and three other classmates, has been criminally charged for the bullying and harassment that led to Emma's shocking suicide. Now Sara is the one who's ostracized, already guilty according to her peers, the community, and the media. In the summer before her senior year, in between meetings with lawyers and a court-recommended therapist, Sara is forced to reflect on the events that brought her to this moment—and ultimately consider her own role in an undeniable tragedy. And she'll have to find a way to move forward, even when it feels like her own life is over.
With its powerful narrative, unconventional point of view, and strong anti-bullying theme, this coming-of-age story offers smart, insightful, and nuanced views on high school society, toxic friendships, and family relationships.
Supports the Common Core State Standards.

Whenever there's a case of bullying, everyone looks to the victim. Are they ok? Will they be permanently affected from this? But no one ever looks to the actual bully. In this new thought provoking novel by Amanda Maciel, she makes that leap into the mind of the bully for us all to see.

"'I didn't kill her. Brielle didn't kill her, the guys didn't kill her. Maybe someone should blame her parents for making her transfer schools a million times. Or just being crappy parents, or whatever, I don't know. I just wanted her to stay away from me and my boyfriend, and she wouldn't."
pg. 94

Before Emma, Sara was just a normal high school girl who was worried about one of the most important things to her. Her boyfriend. But then rumors start going around that Emma is going after everyone's boyfriend. Including Sara's and her best friend Brielle's. But Sara and Brielle are already popular, so basically anything they say, everyone will automatically go along with it. So when they start calling her a slut, it's not long before mostly everyone else in school is too.

"The thing about having one really good friend, one person you talk to all the time about everything, is that you stop really talking to anyone else. You sort of talk to other people, but mostly you have your one person and that's enough."
pg. 97

I really applaud Maciel for diving into the mind of the actual "villain." I have never read anything like this and it made me think of a lot of different things. Like am I supposed to feel bad about her getting everything that she deserved? Or am I supposed to feel sorry about her getting her boyfriend stolen? Or am I supposed to want her to not getting in trouble for just getting revenge for someone who wronged her as well? But then I realized that these things just can't be answered. Because although it was unfortunate that these events transpired over a boy, Sara and Brielle took things too far. They knew that Emma wasn't completely stable as it was and for them to continue doing these terrible "pranks," made them seem vicious. That's just how good her writing was. It was full of emotion and made me think of so much. It was really hard to tell this was a debut.

Being inside Sara's head made me feel for her though. Although she seemed like a terrible person by her actions, she was really just a confused, self-conscious teenager. She didn't know where she fit in and she clung to the only people that made her feel as if she did... Dylan and Brielle. But then even things with Dylan goes sour and she doesn't know what to do. All she wants is to get him back. But I think that's what made me upset with her. She only thought of herself. How she would look if she just let Emma take him. How she would look if Brielle thought she wasn't being mean enough. It was just all so selfish.

Bullying is such a serious topic and I haven't read a more emotional story about it. Clearly so many people are hurt by it so I'm surprised that things like this still happen. I would really like for this to be used in schools to see that being a bully doesn't prove that you're cool. it just proves that instead of being a leader and being your own person, you're nothing more than a follower. Stand up for yourself, but being hateful and mean don't need to be part of the equation.