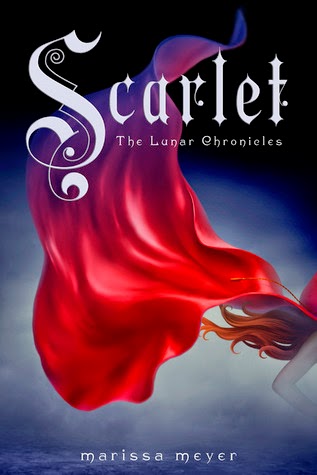 Cinder returns in the second thrilling installment of the New York Times-bestselling Lunar Chronicles. She’s trying to break out of prison—even though if she succeeds, she’ll be the Commonwealth’s most wanted fugitive.
Halfway around the world, Scarlet Benoit’s grandmother is missing. It turns out there are many things Scarlet doesn’t know about her grandmother and the grave danger she has lived in her whole life. When Scarlet encounters Wolf, a street fighter who may have information as to her grandmother’s whereabouts, she has no choice but to trust him, though he clearly has a few dark secrets of his own.
As Scarlet and Wolf work to unravel one mystery, they find another when they cross paths with Cinder. Together, they must stay one step ahead of the vicious Lunar Queen who will do anything to make Prince Kai her husband, her king, her prisoner.

*MY THOUGHTS*
Guys, I don't even know where to start. This book was absolutely amazing. Like mind blowing amazing. Every question I had from Cinder was answered in this book and it opened up so many more questions that I'm sure will be answered in Cress. I know I was saying for the longest how bad I wanted this book, but I should have waited. There is NO possible way I'll be able to wait until 2014 for Cress. I need to know what happens now!
In this book we see that Cinder has escaped prison and continued on her journey. And in doing so, she has defied everyone, from Prince Kai to The Lunar Queen. Across the waters, we meet Scarlet who is desperately looking for her grandmother who has disapperaed without a trace. She meets Wolf, a very very HOT stranger who's a street fighter (I CALL DIBS ON HIM! HE IS MINEEEEEE!) who knows more than what he originally says about her grandmother's disappearance. Together they work to put the pieces of Scarlet's life together as it unravels, as she finds out that her grandmother had more secrets than she ever knew. But then, they cross paths with Cinder and realize that the mystery is way bigger than they ever thought.
Everything about this book makes it a bad ass sequel. Although there was a cliff hanger in Cinder and I hated it, every question I had about it was answered in this book. There was nothing that I felt was unanswered. Then towards the end, the ending wasn't a cliff hanger, but it did leave me with more questions and wanting more than ever to finish reading the series. I love that Meyer was able to set us up for the next book without making it awkward and still keeping us interested.
Now the characters in this book are amazing! Cinder is still super strong and a great heroine. But I must say, I enjoyed Scarlet just a little more. Only because she was so strong and stubborn. She reminded me of me lol And then I was soooo happy to see Iko again! I was a little worried after Cinder, I wasn't sure if we would see her again. Then, although he was annoying, I was happy that Cadet *ahem* Captain Thorne was around. He seemed to mainly be there for the comic relief and I was thankful for it, because trust me, there is A LOT going on. Lastly, I LOVED Wolf. He was everything you would want in a book boyfriend. Sexy, edgy, and full of secrets. The usual bad boy. I loved learning more about him. I was also thankful for the pre-quel that Meyer wrote that explained his beginning. His tale alone is an emotional one.
What made this story for me, was the truly remarkable world building. I was blown away by the way Meyer was able to tell the story of two different heroines at the same time without confusing her readers and then having them collide as if they were together all along. To make it even better, we are able to read it from everyone's point of view which makes us able to know more details about each character and what is going on in their world.
Scarlet picks up right where Cinder left off and definitely sets the stage for the brewing war in the future books. This book easily became one of my favorite books and The Lunar Chronicles becoming one of my favorite series. Scarlet was an amazing sequel that will leave you waiting, wanting, and wishing for more!