Dare You To by Katie McGarry

e-ARC, 479 pages
Release Date: May, 28, 2013
Published By: Harlequin Teen
Companion (Pushing the Limits, #2)
Source: NetGalley (A HUGE thanks to the publisher and Netgalley for this galley! It was given to me in exchahnge for a just and honest review.)
For fans of: Contemporary romance, Sparkly covers, Chick lit, Realistic Fiction, YA

Ryan lowers his lips to my ear. "Dance with me, Beth."
"No." I whisper the reply. I hate him and I hate myself for wanting him to touch me again....     "I dare you..."
If anyone knew the truth about Beth Risk's home life, they'd send her mother to jail and seventeen-year-old Beth who knows where. So she protects her mom at all costs. Until the day her uncle swoops in and forces Beth to choose between her mom's freedom and her own happiness. That's how Beth finds herself living with an aunt who doesn't want her and going to a school that doesn't understand her. At all. Except for the one guy who shouldn't get her, but does....
Ryan Stone is the town golden boy, a popular baseball star jock-with secrets he can't tell anyone. Not even the friends he shares everything with, including the constant dares to do crazy things. The craziest? Asking out the Skater girl who couldn't be less interested in him.
But what begins as a dare becomes an intense attraction neither Ryan nor Beth expected. Suddenly, the boy with the flawless image risks his dreams-and his life-for the girl he loves, and the girl who won't let anyone get too close is daring herself to want it all....

*MY THOUGHTS*
Before I get started though, there was something really cool that happened when I was reading this book. I was just reading this and then I get on Twitter to play for a minute and see this: 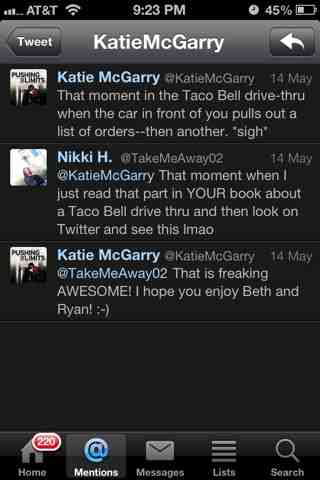 Ok obviously my phone screen shots suck, but yeah, the words are pretty clear... I was on Twitter and reading when I saw Katie mention Taco Bell's drive thru. After I had JUST read the Taco bell drive thru scene in Dare You To! That was like freaking awesome timing lmao
Anyways, as you know, Pushing the Limits was one of my favorite reads of 2012, so when I heard about Dare You To, I was superrrrr excited. And then I got upset when I saw that the names were Beth and Ryan and not Beth and Isiah. I was sad that they weren't going to get together, but then I found out the reasoning behind it..... Isiah will get his OWN story, Crash Into You. Mrs. McGarry, you are indeed an evil genius.
But even though I wasn't 100% on the Ryan bandwagon in the beginning, the story definitely turned me into a Ryan fan. Granted he's no Noah, but he and Beth had their own story and I loved something about each one of them. As for Beth, its a little hard to say what I thought of her. I loved that she was so passionate about certain things, but that was also her downfall. She was so passionate about the wrong things. Her mother and her past life smh, I would have left it all behind. If I had been her, in that first scene with her mother I would have sent her to jail. She can be fed, clean, and free of the monster in there. But Beth was too busy focusing on the fact that she wanted her mother free, but she didn't think about the fact that even while she's not in jail, she's still not free of the bad things holding onto her. As she held on to all those things, she seemed ungrateful and it was hard to read through her temper tantrums. But as her shell begins to crack, Beth turns into a different person. I loved the person she became when she was finally with Ryan. She had hope and finally knew the real meaning of love.
When it came to Ryan, he had his own demons following him. His parents are both idiots in my opinion. His father is a man who I could NEVER talk to or understand. So many things in this story he steered his son down the wrong path. I was floored that his mother never said anything about it as scared as she seemed of him. But the persona they put on for their community makes them all seem perfect. To everyone except Ryan. At first I wasn't just in love with him, but as the story went on I began to see why everyone was falling for him so hard. He had to figure out a few things about him self just as Beth had to figure out somethings about her self.
Together, their romance felt real and it didn't seem rushed. It was nice to see their changes as things went by. There was so much growth for the both of them throughout the story and it was nice to see that love can really change even the hardest things.
Overall, I give this